Scotland 2019.. did that really happen

Get on yer bike and lets rumble!!

Scotland 2019.. did that really happen

. so many nice things to remember for another year

why would you not want to go every year

how many men does it take to fix a puncture

the logging road.. thats all i will say

And the nightlife wasnt to bad either


feeding time at the zoo

looks like Pete doing a bit of chatting up?

thatl be the beer then?

you had to be there to understand why lol

major downer now its over

was so nice to visit Norman aswell.


A great weekend with some great riding friends, its the highlight of my biking year

Well seeing as fabio stole my photos there, I won't go on with a lengthy post

Seriously though the best time was had. I've never had such a decent riding experience and it was a good time to get to know the storm I bought a short while ago

Highlight for me was heading down that road with Alistair and James ahead (obviously) and an aprilia right up my backside.

Al and liz you put on A great show. Was nice to visit Norman's grave and I've no doubt he would be looking down laughing and very proud.

Until next year
If you don't try you never know if you can do it.
Top

it was fecking epic

the friday ride there with Bazza and pete from my house was wet. we met tony and flatty in Hawes and it was still wet ... but we had fun in north yorkshire despite the rain .... boy can you trust the Michelin pilot road 5s in the wet!..... got to the border and it starts to dry out so we had even more fun

bonfire, burgers, beer and banter were the oder of the day ... delivered to excess

saturday was almost all dry and the logging road was perfect, Fabio got off his bike and kissed the road!! . But The quote of the day came from Tony who declared "I have decided I won't sell the SP2, I will just buy a house here instead"

then we went past the Budhist temple but we did a detour to Hawick to see the Hizzy museum which was cool, then the run down past St marys loch and through the glen to the Grey Mares tail [waterfall] where Fabios phots are taken ..... when james and I got there, we just got off the bikes and fell on the ground to allow our senses to try and stop spinning ..... by christ that 701 supermoto [in the right hands] can fly .

the rain caught us for the run down Dalveen pass, but we had found our rhythm, so we didn't bother to put on waterproofs, we just kept the throttle pinned and enjoyed the sweeping shell grip corners.

it started drying out again so we threaded the needle down the worlds narrowest A road and then finished it off with a lap round Loch Ken.

by the time that was done we needed more beer and burgers ..... and Grumpy frog had also turned up so there was added whisky to reinforce the sore heads for the next day.
unfortunately the bonfire had been confiscated by a group of boy scouts. men with beer can't be near boy scouts incase they get corrupted!!!
then there was the fire wood incident that further soiled the relationship with Mrs Scout leader ... but we won't talk about that!

sunday was not raining, but roads were wet, most folk were heading home but Pete, GrumpyF and the NI crew did the run up to Ayr on the way to the Ferry. that left Pete and I to do a few more hours of cable streaching down to Newton Stewart then back over Clateringshaws to New Galloway, then to Kirkcudbright to spend the night ..... 2 beers and we were done!

Monday it was dry again, so we did the logging road again, went mental down the A6 to Kendal [pete got lost and told off by the plod] then we played round north yorkshire again before a bite to eat and the M6 home.


it was a roller coaster in every way.... seeing Normans new headstone for the first time, and riding past the site of his crash.... but I had a good team to look after me [and my sister], so it was 100 times more celebration than sadness.

I will try and book the same weekend next year ... as long as the scouts didn't lodge a formal complaint and we are now barred.

its about time a few more of you book Monday off so we can do a proper ride Sunday as well as Saturday. ... we just need to pace our selves in the evening

Sent from my iPhone using Tapatalk

the roads are bloody good, but what makes them epic is the lack of traffic and junctions or houses, ... so on the 20 mile logging road, we pass 1 house, met 2 cars coming the otherway and didn't overtake anything!!

on many sections you can see the next 5 or 6 corners are clear as you crest the hill, so you can get a bit "sporty" knowing there is no hazards or blind bends.

how many men does it take to fix a puncture

one from what I remember

the rest were resting or talking

Not a lot more I can add really.
Ali, that’s a brilliant write up. My piccies ate nearly the same as everyone else’s but here are a couple which are different
First of all. What a wonderful day after what had been a rather soggy ride up. 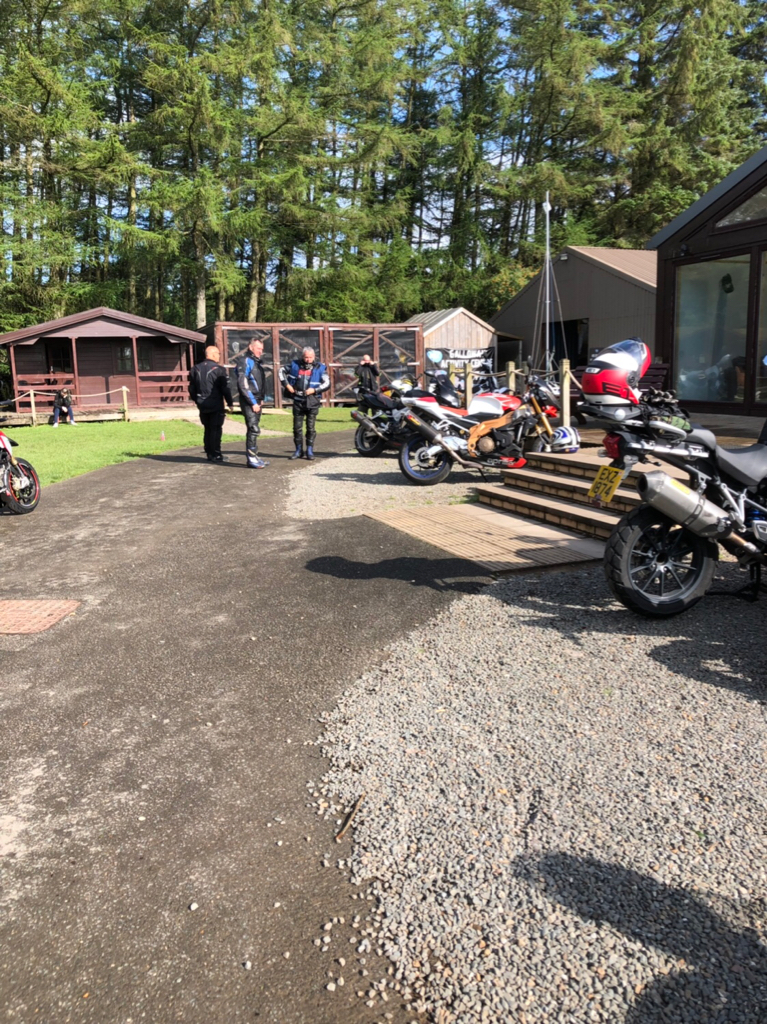 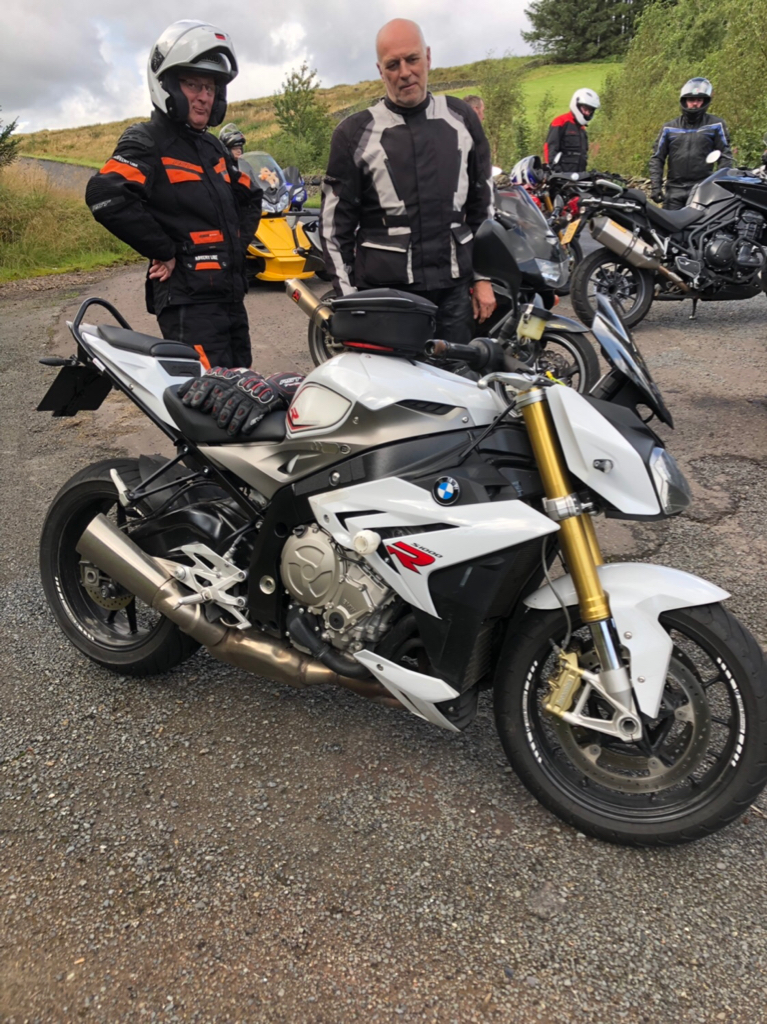 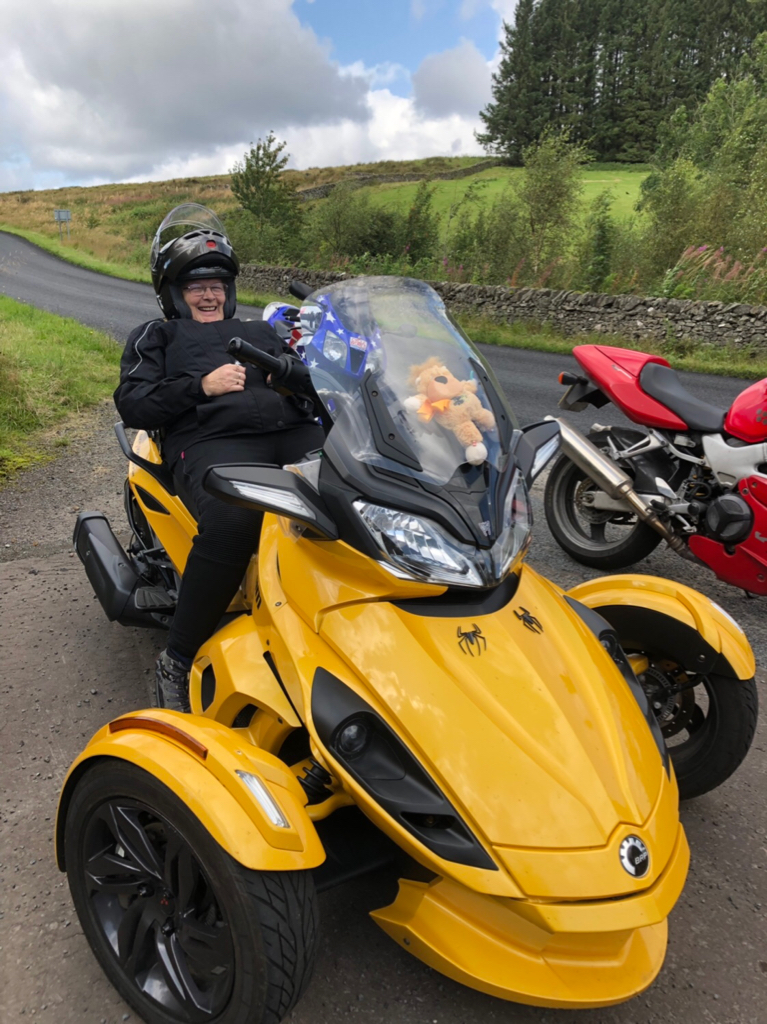 And of course one of the scenery for the purist. 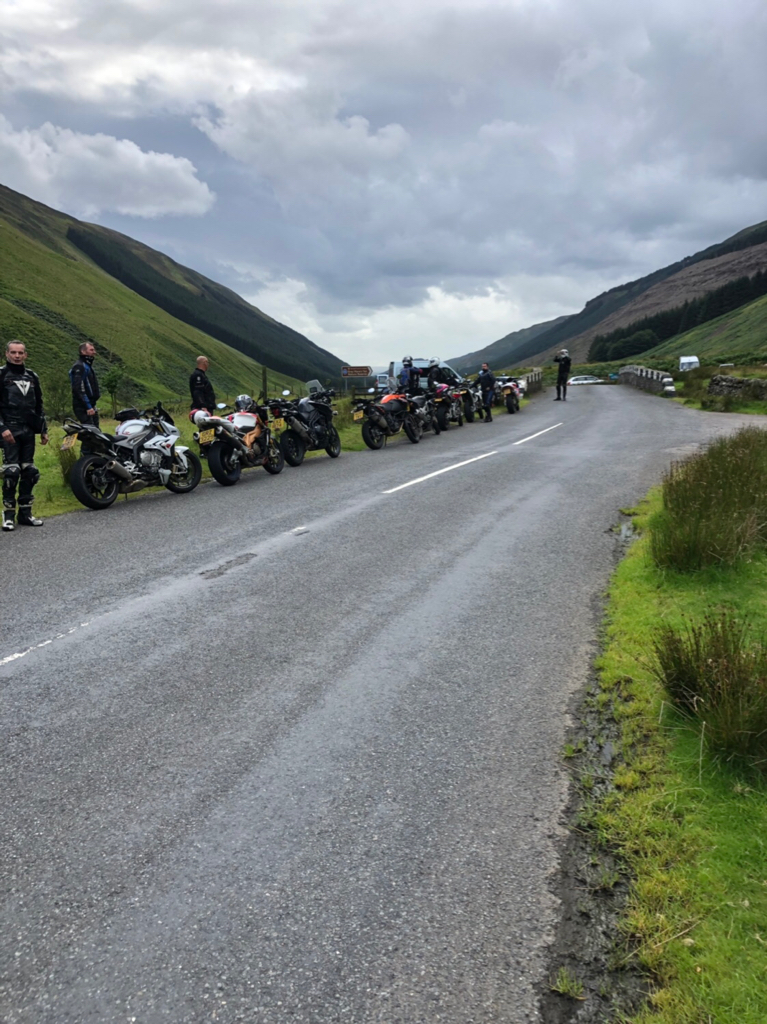 And this one is for my private collection. Some of you may recall the noddy car in Devon. This is the latest edition 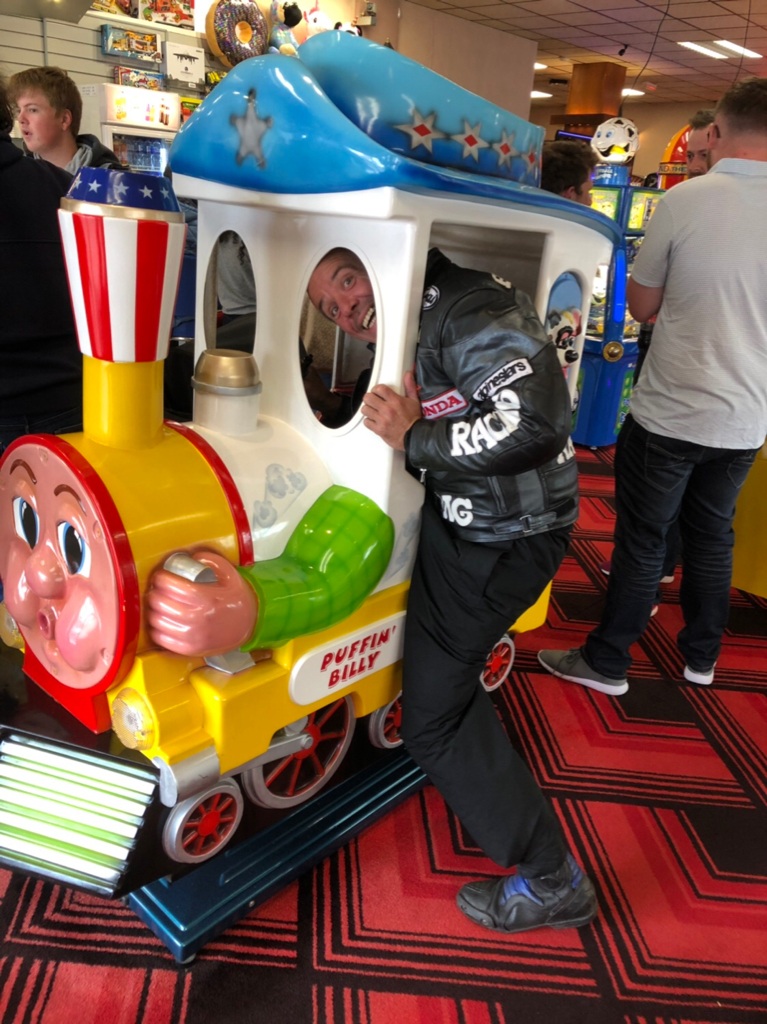 Fair play Rob, I know you really didn’t want to do it but you engulfed me anyway

And Fairs fair. You can have this one in return 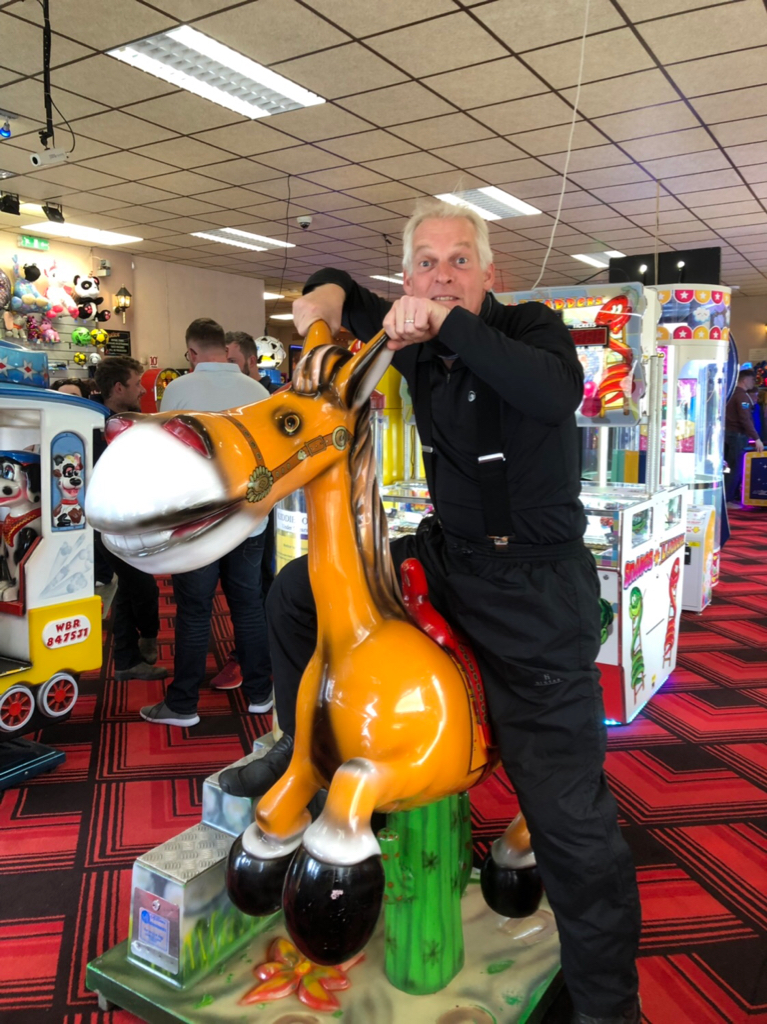 Can’t believe we didn’t get asked to leave

Many thanks for all the photo's and added info, it certainly looks like, and sounds like you had a brilliant time

This time last week we were on the ferry.

Thanks so much for organising such a fantastic weekend Al and Liz. I’m sure it was filled with emotion for you both.

It was great to see everyone and share riding those sublime roads. Selkirk to Moffat was pretty special.

Looking forward to seeing everyone next year.
Top

Thanks so much for organising such a fantastic weekend Al and Liz. I’m sure it was filled with emotion for you both.

It was great to see everyone and share riding those sublime roads. Selkirk to Moffat was pretty special.

Looking forward to seeing everyone next year.


James,
it already feels like it was more than 1 week ago .... this normality and all its chores / stresses / interruptions is a right pain in the @rse, but I guess if we had that much fun every day our heads would explode.

its one of the highlights of my year to lead you guys round my home turf, but it is made 100x better to have someone to play with

Must book the Monday off next year